Facebook Live For Business: Success & Fails So Far & Some Tips! 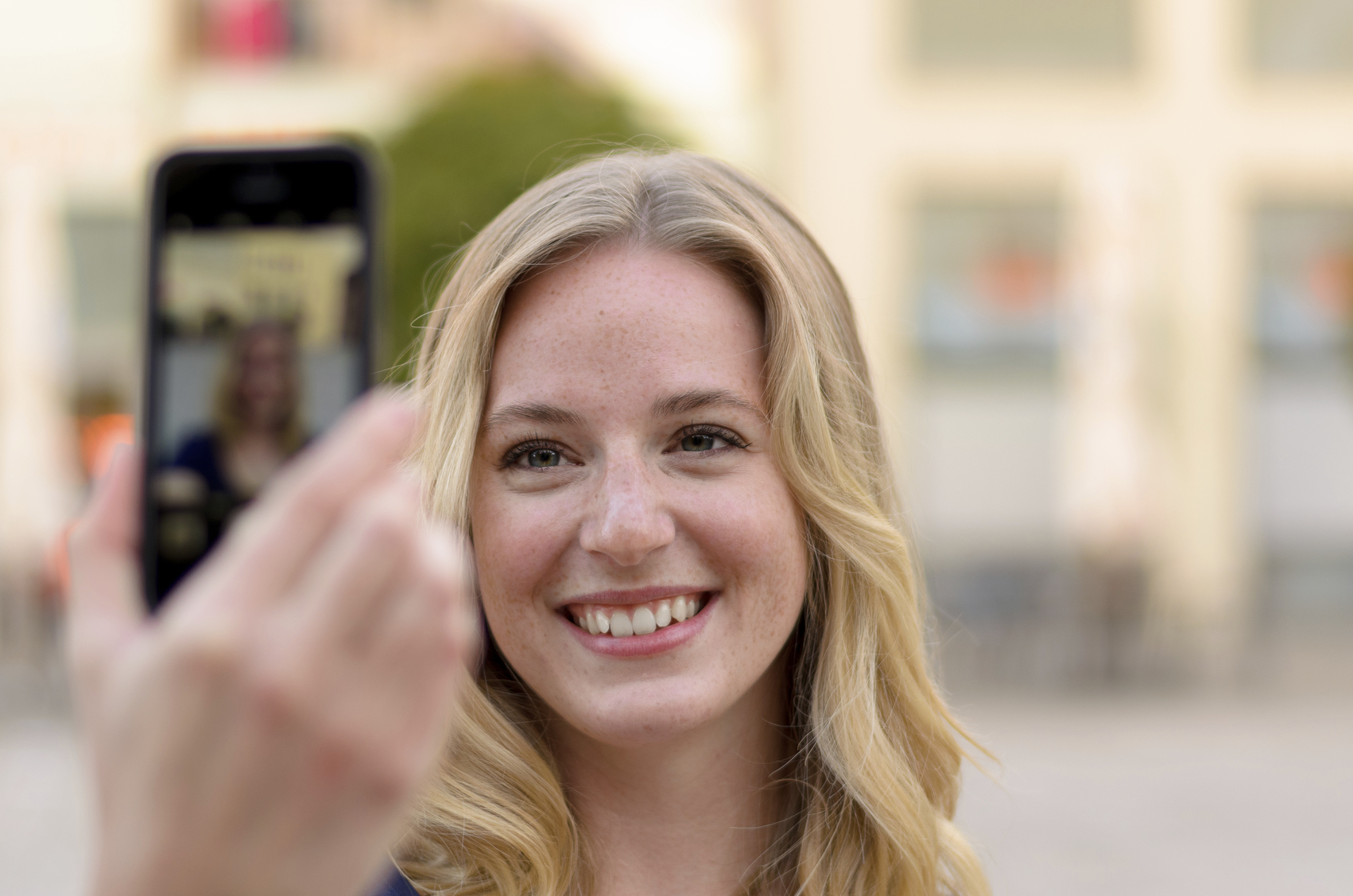 Facebook Live lets anybody / any business broadcast live to their followers and to the world. Even President Elect Trump got in on the act. We look at some Facebook Live international business case studies & offer tips to the budding Facebook Live broadcaster.

Like all social media, it can have a personal or a business use. For those new to Facebook Live who want to understand the personal use side of things,before we delve into the business stuff, here’s a random Facebook Live broadcast I checked out recently: It’s a sunny but cool Monday morning in Dublin, Ireland. Alissa is getting ready to meet her friends in town. She decides to broadcast to the world. “I’m bored” she exclaims. A poster comments “you have beautiful eyes”. Alissa wonders what type of clothes and coat she should wear as “it’s cool out”. Both male and females post mostly positive comments. In between applying make-up, spraying her hair, changing her jeans (off camera), she interacts with people’s posts saying “thank you” or “that’s rude”. Over two hundred and sixty people are watching; the number fluctuating continually as some people drop off and others commence viewing. Why does Alissa do the live feed? Presumably, for her generation, the answer might be ‘Why Not’. It’s just an extension of a conversation. It just so happens that the people she’s communicating with aren’t in the same room as her, and most are probably in another Country. She probably doesn’t know the majority of the people she’s interacting with. It’s just for fun and perhaps doesn’t do her ego any harm either. 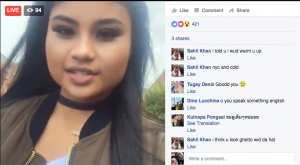 Find Facebook Live Video Feeds Anywhere In The World – Facebook Live Maps
People can search for live broadcasts from around the world using Facebook’s Live Map. For some feeds, you can also see the approximate locations of the viewers. At the time, Alissa’s live video was the only one streaming from Ireland with a scattering of live feeds in Europe and the Americas.  Thailand seemed to have the largest amount of live feeds (13.00 GMT so perhaps it was to do with the time of day there). A quick search through around twenty feeds in Europe delivered just one scantily clad female lying on her back.  Live videos from around the world vary from radio stations, religious preachers (real ones and self-appointed), a child getting his hair cut, young teens smoking and kissing, a guy just waffling while driving his car, a girl in Thailand drinking a smoothy. Dull as dishwater. 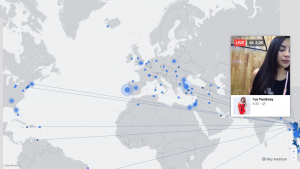 Video Marketing Using Facebook Live Video
The most interesting video I came across from a business video marketing perspective was from World Surf League ( https://www.facebook.com/WSL/ ), showing surfers riding the waves in Portugal with 4,100 viewers.  World Surf League show how Facebook Live can be a great way to promote an event once you have an established fan base and communicate in advance exactly when the live feed will be happening.

Facebook Live Video: The Early Days
Facebook Live is a relatively new service, and undoubtedly will find its feet as a new social norm and also as another tool to add to the video marketing armoury of big brands and various types of companies looking to sell their wares or influence others.

Trump Campaign Uses Facebook Live
About two weeks before the US Presidential Election, Trump’s campaign team started broadcasting live on Facebook each evening. Some people may be tired of all things Trump at this stage so here’s the video link (currently over 1.5mn views) should you be that keen to hear them come live from “Trump Tower War Room”: https://www.facebook.com/DonaldTrump/videos/10157966101380725/

BuzzFeed:
The most successful Facebook Live video of all time had 807,000 viewers watching at its peak. The 45 minute video, by BuzzFeed, consisted of two people in protective wear tying elastic bands around a watermelon until it exploded. The live video has now clocked up over 11 million views. If you want to watch the inevitable watermelon destruction skip to time 44.05 below…
(BuzzFeed is among a group of Facebook Live paid media partners so perhaps Facebook helped to promote in advance).

Disney & Airbnb
The Jungle Book’s Facebook page live streamed interviews from the red carpet at its premiere Airbnb had a treehouse built for the event. It has over 112,000 views.

Benefit Cosmetics (Cosmetic Company)
To spare you having to watch a video about eyebrows, I’m just pasting a video still. They do a weekly live video about beauty products. One of their live videos has over 600k views and lots of likes.

The Metropolitan Museum of Art in New York has done a number of Facebook Live videos.

A live video of a preview of an exhibition was broadcast four days before it officially opened. I can’t see how many live viewers it had at the time but it’s now clocked up over 55,000 views.

Wright Windows (Ireland): Window Manufacturer and Installer
Irish window manufacturer Wright Windows did a Facebook Live broadcast from their exhibition stand at the Ideal Home Show in Dublin, Ireland. Two posts were done in advance promoting the live broadcast three days before and on the morning four hours before the broadcast. The live broadcast enabled Wright Windows to give a background to their windows and doors and also answer customers’ queries in real time on Facebook. The video has been viewed over 800 times (and counting) organically (without the video being ‘promoted’ through paid advertising on Facebook). VideoAgora.com managed the Facebook Live video on behalf of Wright Windows. 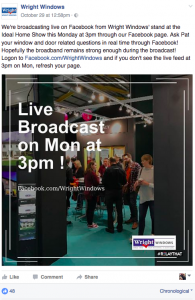 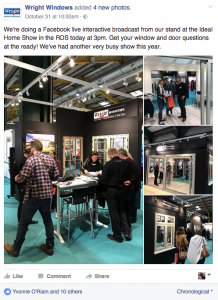 We are streaming 5 of our 21 conferences each day on Facebook. Don’t miss a minute.

24 Hours Facebook Live Streaming
You can now stream 24 hours per day but there’s there’s some Facebook code to be sorted out first via Facebook Continuous Live Streaming API. (Self plug: VideoAgora.com now also provides consultancy to business who want continuous live video on Facebook so we’ll post some more examples to the blog again soon).

The only difference between a typical live video (lasting up to 90 minutes) and a longer video is the 90 min + videos can’t be saved or shared.

Facebook Two Simultaneous Broadcasts In One
Have two live videos play on the one screen at once with one video inset into the corner of the main video – this allows for two remotely recorded videos to be shown simultaneously on the one screen (think live tv news interview). This functionality is being released to certain users of certain verified pages such as those using the Facebook Mentions app (actors, athletes, journalists and other public figures) in the US. In time, this has the all kinds of potential (useful and not so useful) for business and the public. 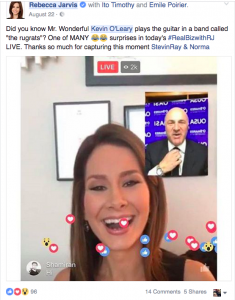 Facebook Live Virtual Waiting Rooms
This functionality is coming soon whereby people can hang out in a ‘waiting room’ while waiting for a live broadcast to start. This can help form a larger audience for the start of a broadcast.

Improve Your Reach With Live Video
Facebook are treating live video differently to normal pre-recorded video as they’re finding higher levels of engagement with live video:
“…we are making a small update to News Feed so that Facebook Live videos are more likely to appear higher in News Feed when those videos are actually live, compared to after they are no longer live. People spend more than 3x more time watching a Facebook Live video on average compared to a video that’s no longer live. This is because Facebook Live videos are more interesting in the moment than after the fact.”
– https://newsroom.fb.com/news/2016/03/news-feed-fyi-taking-into-account-live-video-when-ranking-feed/

Promote Your Broadcast In Advance

Let your followers know the time and date of your live video (as a rule of thumb a day’s notice would suffice). Write a catchy relevant title/description to draw potential viewers in.

Check Connection
Make sure your internet connection is strong. You don’t want your video to be of poor quality or to stop during your broadcast.

Use a Microphone
If you’re talking directly to camera, consider using a microphone to maintain consistency of sound.

Choose Your Audience
Select if the live video will be accessible to the public, friends or both.

Interact
Interact with your viewers by name when they comment and do your best to answer their questions.

Duration
Longer broadcasts will enable latecomers to still enjoy your live video and will increase your chances of being discovered and your video shared (while still live or after) on Facebook. You can stay live up to 90 minutes but Facebook are always tweaking this (it may be possible to go live 24hours a day depending on your phone with necessary set-up).

End With A Call To Action
If you’re using Live video as part of your social media marketing strategy, end your video with a call to action such as sign up to your newsletter or pm (private message) you for more information.

Edit Your Video
When you’re finished with your live video, you can go and edit the video and have the same functionality as with a recorded video.

Rather than try to rehash here’s the tips straight from the horse’s mouth:

Interview – Bring a friend/colleague/expert into the conversation

Performance – Play a song, rehearse a scene, practice your sport & provide a peek into your craft